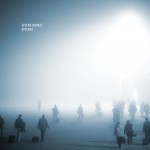 This album was not inspired by Brian Eno’s „Music For Airports“, Stefan Gubatz remarks/ hisses when he talks about his debut album on Telrae.

His album is the result of waiting room situations and undoubtfully it is an atmospheric piece of music which is based on landscapes of sounds, abstract beats… altogether creating an intense atmosphere not unlike his track „Transistor“ on Telrae 009.

Stefan has recorded two 10“s on Telrae so far and several remixes for the label filed mostly under the genre of dub techno. This album exceeds this genre categorisation but also keeps elements and key aspects of deepness. That his airport inspired concept failed to materialise is another story we will turn to later…

Originally the project was triggered of by the idea of making music in a comfort and safety zone while waiting for a delayed plane. As everyone knows, these hermetically sealed zones defy time… and time altogether gets a different meaning or better time itself is deprived of its meaning hence there is no such thing as time anymore.

In such a place, and there is no such other place in the world, Stefan started to write his 10 minute a piece epic trax, 8 different tracks. But the concept came to an bitter end.
Intrigued by the quietness and also the coldness (it was winter) all of this reminded him of his home town in Nordfriesland/ North Sea „always cold always bad weather“ as he puts it… the connection to the North Sea was easily made… and since the concept of writing music in comfort zones had to be abandoned after delays where too small to write music in, hence 2-3 tracks were recorded in his home town Husum.

The intention of the album is nothing more nothing less than to create an atmospheric intensity. The atmosphere is on the surface of all of the trax very similar but when you listen to them the music is very different.

The whole album was recorded two years ago and took him a year to finish… and inspired him later to start with his 10“ inch releases on label Telrae. The making of the album gave Stefan access to the field of dub techno productions without aiming specifically at the genre. For him it seemed just appropriate enough to capture his feelings. All tracks are connected to each other creating a perfect flow, but will also be available as single trax.

To add some last words, we think this album is pure lava, a simmering affair and a real journey. The photo of the cover was shot by Stefan Gubatz himself at one of the airports he spend time in. It reminded him of a surreal picture in which foot passengers walk towards a bright light… into the apocalypse… he had to pull the trigger put the scene on celluloid.
Airports appearing here: Cologne and Bologna.