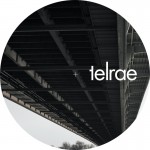 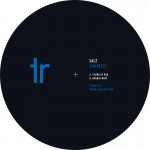 This 4 tracker consists of 2 originals by Salz and remixes by Van Bonn and Joergmueller.

The original of “Stainless Dub” is a 100% full analogue take… a fat track … deep to the core.. with very little stunts or decorations. This track makes sure there are no distractions from any side, relentlessly and steady it keeps rolling with the comfort of of a trains linear equation… nothing breaks the groove, chords and snippets of sounds appear but nothing stays there forever. Take a seat.

“Orange Whip” could be called the big nasty brother of “Stainless Cub”. It drills its way through time just like a rusty nail through a piece of solid wood. Forget easiness this track installs an feeling of anxiety. Sounds steadily seem to drip as if there were no seasons or tides.

Dub Techno can be great. Van Bonn’s core artist on Telrae has contributed a “raw construction” remix of “Stainless” that is very much on the DJ side of things and connects music wise to his remix he just did for A. Trebor on the Trapez 134 which will be released in August 2012. A heavy groove, somehow raw and industrial with a nice static to it… works hand in hand with effects /delays that suspend themselves over all of the other elements. The track functions in an additive way… introducing new sequences that raise the dynamic to another level step by step but still keeping the cool. This remix is a true rocker!

joergmueller designs sounds in the car industry and has been writing music for some time now. He has remixed “Stainless Dub” for Salz. Joerg’s composition bases a subtle but complex sound structure with chords + effects on top of a “sophisticated” fat kick-bassline construction, which is sexy to say the least. This unit is tight no doubt about it… the sounds keep being layered and a certain amount of randomness is added helping to create something very artistic and cool, maybe moody is the better word. We see here another artists to join the Telrae rooster who has greatness and who is about to deliver his first album in September. Watch out for him.